I voted the other day. I voted Obama for president, and a mix of libertarian, democratic and republican candidates for all the other offices. Mostly I tried voting out wackaloons. I was disappointed that I couldn't vote out Gail Lowe from the Texas board of education. It turns out that the part of Bell county that I am in, is in a different district than hers. My district here didn't have a board member up for election. Voting for Obama is kind of a throw away vote in Texas since it's so republican (Big Oil + Bible Belt = Republican), but maybe McCain and Palin will do something really stupid to piss off Texas and my vote will actually help...we'll see.
Posted by Unknown at 1:37 PM 4 comments:

I think it's a grand idea to have health care for all. I'm not sure how exactly it should be funded. I would hate for taxes to be higher so that I can pay for other peoples health care and get rid of the great health care I get through my job. I know that sounds selfish, but honestly I don't see why I should pay for someones survival when I have a long list of things that I need to spend the money on for my family's welfare.

I've also had "free" health care before. I spent four years on active duty military, and an additional two years after that my wife was active duty. If the government's health care is anything like the army health care than it's not worth it. People went to the doctor way to often simply because it was free. Every little cough or sniffle sent people into the waiting room. The doctors had no incentive to give good care. They didn't give a rat's ass in most cases (There were a few good doctors). Everyone was over worked, under appreciated and bitter. I also don't like being forced to do something. If I'm getting taxed an extra 500 dollars a month for health care that sucks, I'd much rather take my money and buy my own. I guess it comes down to how well it was managed. If it's run like medicare and social security have been run then I'd rather keep my money. So I guess I'm for it if they do it right, but I'm mostly against it because I don't think they can. I also don't have the slightest idea how running it the right way would even work. I don't think I would recognize a good plan for universal health care if I saw one. If they could fix all the other disastrous government programs then I would be a lot less hesitant to support government health care.
Posted by Unknown at 6:08 PM 5 comments:

The last post made me think of Go Betty Go, so I thought I'd give you a taste and share a short story.


I went to see Flogging Molly in concert, but had never heard of the two bands that were opening for them. One was called Boston Harbor I think, and the other one was Go Betty Go. While listening to Boston Harbor, I went out into the lobby where you can hear just as well to get some drinks and check out the few vendors that were out there. There were a few tables set up with Go Betty Go merchandise all over it; Shirts, demo cds, stickers, etc. There were four girls behind the tables that were really cool. I was bs'ing with them, finding out about the band, trying to get some free stuff. They were a lot of fun, laughing and joking, it was almost like hanging out with old buddies. I wasn't really interested in the band that was playing, so I sat down and hung out with them. All of a sudden, they were like "Hey, we gotta go! We'll be back in a bit. You should watch us inside." I went into the theatre, and they all got on stage and started playing! I was pretty shocked, I just thought they were sales clerks. They were so cool and laid back, and they were the band. They weren't very big at the time, and they aren't huge now, although they are bigger than they were then. They were on the Fantastic Four soundtrack, and a national deodorant(?) commercial. After the show we talked a little more. I bought their cd, and they took a picture with me. It was pretty fun because they were just regular chicks. 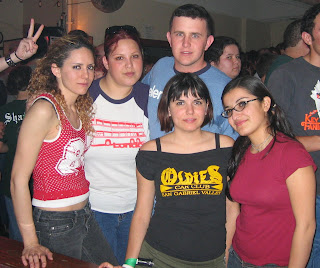 Quite awhile later, maybe a year or so, they opened for some latino band at the same theatre. The band they opened up for had a following of an older conservative hispanic demographic. Basically everyone was there for the other band, and except for their kids, I don't think anyone was under 35 years old. They were all dressed up and ready to salsa. It was a weird booking putting a punk band as there opener. I guess the only reason was to find a larger audience and because some of their songs had a latin twist to them even though they are very punk rock. So me and my friends were there kind of out of place, and only to see Go Betty Go. Before the show they recognized me from the previous show. We talked a little, and then they went on stage. The whole show they basically played just for my friends and I. We knew the lyrics to all their songs, and no one else even knew who they were or even liked their genre. It was a blast.

Since then they have lost the lead singer and the bassist, and now have a new singer. Except for some songs on myspace I haven't really heard the new singer, but they still sound fun. I don't really keep up with music like I used to. It's still fun to reminisce though.
Posted by Unknown at 7:39 PM 1 comment:

If I ever leave this world alive...

I'd like to dedicate this next song to my beautiful wife. The video is nothing special, but the song is one of my favorites, and that's really the only reason I'm posting it. The best concert I've been to was Go Betty Go opening for Flogging Molly in the Realto Theatre in Tucson Arizona. The theatre is small and old, and almost cozey even though the walls are halfway stripped of their plaster and spray painted with various colors and graffiti. It was the Day before St. Patty's Day, and Flogging Molly was extra energetic. The lead singer said "It's already St. Patty's Day in Ireland" and then took a big gulp from his bottle of whiskey. He then said, "But since I'm Irish, every day is St. Patty's day!", followed by another large gulp. It was a great show. Go Betty Go was pretty fun as well.

Posted by Unknown at 7:24 PM No comments: